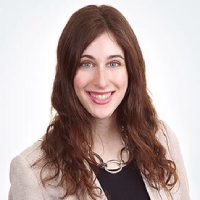 Devra practices in the fields of insurance defence, insurance coverage and general civil litigation, with a focus on fidelity insurance and fraud recovery, as well as the defence of professionals under liability policies.  Prior to joining FCL LLP, Devra practiced at a boutique litigation firm, where she acted for clients in a range of complex litigation matters involving class actions, privacy law and insurance defence.  She has appeared before the Ontario Superior Court of Justice, the Ontario Divisional Court, the Court of Queen’s Bench of Alberta, and the Court of Queen’s Bench for Saskatchewan.

Devra earned her law degree at Queen’s University.  During law school, Devra won third place team at the Wilson Moot and received the McDougall-Watson Memorial Award for her commitment to Queen’s Legal Aid Clinic.  She was also a research assistant, an academic tutor (including in respect of the law of evidence) and an editor of the Queen’s Law Journal.  Prior to law school, Devra attended McMaster University, where she earned several scholarships and awards for academic achievement, leadership and contributions to the university community.